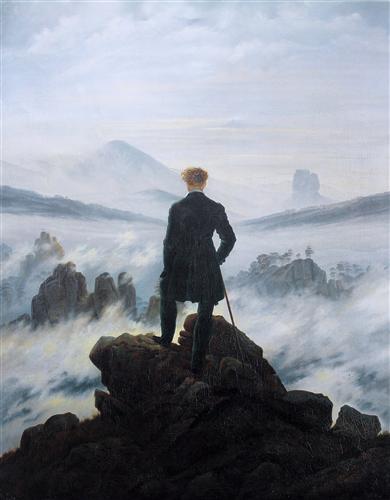 “The Wanderer above a Sea of Fog“ /

for Collin, who’ll appreciate
especially, I’m sure, the
Chopin

while I’m on the subject of clarinet quintets,
since there are so few significant ones, let
me pull Brahms’ out of my hat and celebrate
it, a worthy challenge to Mozart’s own utter
masterpiece

but over a century has gone by, it’s 1891,
Beethoven, the French Revolution, the
Romantic Era is reaching its end, ceding
to Impressionism, after the disruptions of
rampant industrialization, and its
consequent effects on the social contract

Marx has proposed a theoretical master
plan to equitably protect the rest of us
from the 1%, however too politically
fraught, eventually, such a system – see
Communism

furthermore, Darwin had suggested that
we weren’t all descended from Adam and
Eve, but from larvae, which is to say,
millennially morphed, modified, through
time, genetically, leading to festering still
ideological  objections

Elizabeth Barrett Browning had written
her unadulterated love poems to her
husband, Robert, Caspar David
Friedrich had shown us his wanderer’s
back while facing the mountainous
challenges of the upcoming world,
godless now after Nietzsche, Anna
Karenina had thrown herself in front
of a train, Madame Bovary had taken
poison, and Ibsen‘s Nora had left her
husband for a fraught, if not even
dangerous, life on her own, to escape
his safe but insufferable dominance,
while Jane Eyre was finding ghosts
in her cobwebbed, and insufferable,
to my mind, though admittedly
aristocratic, attic

you’ll note the clarinet is not sitting
centre stage, but has nevertheless
a place at the table, by this time,
though not not honoured, familiar,
and is more integrated to the
conversation, the idea of democracy
has taken hold, with everyone having
an equal, and even a vociferous, say

Brahms modelled his Clarinet Quintet,
on Mozart’s, the Classical structure is
still the same, movements, tonality,
musical recurrence, all to wonderful
effect

that he would do that is not a given,
but a tribute to the power of that form,
take the waltz for instance, alive from
even before Strauss, not to mention
Chopin, to approximately the middle
of the Twentieth Century

think about it, who waltzes anymore,
though they might’ve enchanted still,
residually, the  50’s – see Patti Page,
for instance – its lustre having
dissipated, with the wind, as it were,
the gust, before us, of the unending
ages