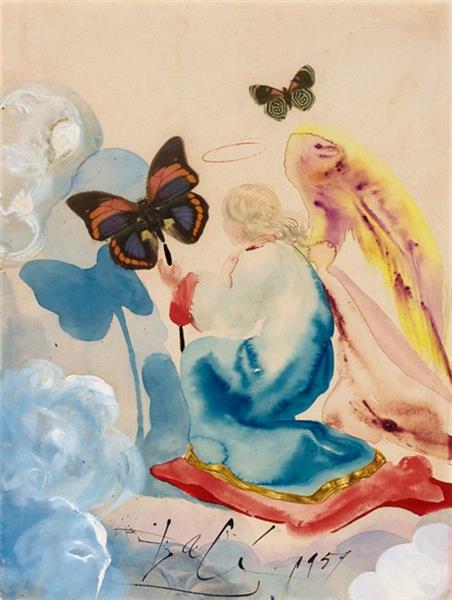 for Elizabeth,
who needs an oratorio right now,
and who takes great comfort,
she tells me, in this music

if “The Seven Last Words of Our Saviour
on the Cross“ is not a divertimento, it
nevertheless didn’t come out of nowhere,
and a clue to its inspiration lies in the
eventual transposition of the orchestra
only piece to, a few years later, the piece
with voice, its oratorio

Haydn had heard his original composition
rendered in a nearby provincial town, where
they’d added lyrics, however saccharine, to
the score, and he thought it entirely effective
and appropriate, had new less sanctimonious
lyrics composed, and gave us what we now
hear

oratorios go back quite a while, not
surprisingly, they are quintessentially
religious music, meant to inspire, a
familiar convocational ploy, Bach and
Handel made them especially immortal
in the early 18th Century

listen to Bach’s “Easter Oratorio“ to see,
to hear rather, the connection to Haydn,
though you might not even notice much
significant difference, they’ve as many
movements more or less, nine for Haydn,
Bach’s has eleven, but all the forces are
the same, and in the same order

that Bach’s oratorio would be more
joyous is not surprising, the occasion for
the “Easter Oratorio“ is one of celebration,
where “The Words“ is more lugubrious, it
describes a portentous demise, dance
rhythms therefore are not in the former
inappropriate

its dances, however, are rather gavottes
and sarabandes instead of the later
minuets, a not not instructive alteration
when you think that minuets not much
later than Haydn had become waltzes,
more about that later

in the “Easter Oratorio“, the story is told
by the singers, whereas in “The Seven
Last Words“, the music is doing the
telling, secured by the fact that the piece
was originally written without singers

“The Words“ is more dramatic, more
use of contrasting volumes and tempi,
the piano hadn’t been invented at the
time of Bach, long notes couldn’t be
accommodated on the harpsichord,
which determined the pace of the plot,
the piano allowed with its soft pedal
a moderation in volume, and with its
hold pedal a moderation of a note’s
resonance, which allowed for more
expansive expression, which led
eventually, nearly inescapably, to
the Romantic Period, after passing,
of course, through, Mozart and
Haydn

but listen to what Bach can do
without these later interventions,
proof that a poet can inspire with
merely a matchstick, the second
aria itself – My soul, the spice that
embalms you shall no longer be
myrrh – for soprano and baroque
flute, spare as it is instrumentally,
is manifestly entirely worth the
priceless price of admission